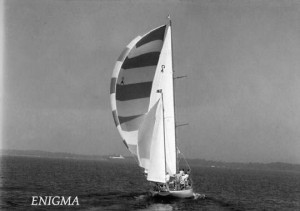 The yacht Enigma owned by Kennedy M. Eckerd kept a fairly good log, much of which was laced with poetry of sorts written by various poetic and non poetic members of the crew. The following are excerpts with a short story of what initiated said

A FUNNY THING HAPPENED ON THE WAY TO BUFFALO
It seems like on the “leg” between Port Maitland and the Buffalo Yacht Club, we lost a member of our crew. That member was George O. Loesel, long time crew member and great friend of the owners. It happened like this, his son Skipper Richard O. Loesel was getting nervous because he was staying at a hotel in Dunnville (all the boats had gone up the river to Dunnville and anchored out since there was no planned docking or facilities in Maitland that year). It was raining and blowing like stink the next morning and the crew of Enigma had over slept. As they were pulling the anchor there was no George to be seen on the dock. George had arrived early enough, but since he saw no activity, he had ducked around the corner of the building to get out of the rain. Eyes never met, so we left without George. Of course we really felt bad about it in as much as it was a holiday and he did not have a car. There was no bus service that day going thru Dunnville, but oh well…. This is the poem that George, who signed his work Jorge later, wrote in the Enigma’s Log:  The seas were high, the wind was strong But the good old Enig just stumbled along

The Buffalo Yacht Club was finally reached But where was George?
Stranded on the Dunnville Beach INTERCLUB JUNE 30, 1962

Erie Yacht Club To Port Dover
THE ADVENT OF PLASTIC THROW AWAYS
In 1962 there weren’t many fiberglass “auxiliary” racing crafts around, but they were creeping in as the following poem from the Enigma’s log shows:

We hit the line in the early morn
The eastern sky was newly born
The port commission had dredged all week
To fill the eastern end of Four Mile Creek
A pipe laid cross the channel too
Was dropped right as we came through
A spinnaker to the point and than head on
We finished 1st, but doggone
A little boat by McLeod
Too damn quiet she screamed loud
Billy Walker and Doug James
Had just begun to play their games
(The little boat by McLeod was one of the first Tartan 27’s, a damn plastic throw away rule beater)

INTERCLUB JUNE 29, 1963
Erie to Port Dover
NEVER MESS WITH A PORT DOVER HOCKEY PLAYER
Once upon a time after the Erie to Dover leg of the race, and a fair amount of drinking and sailor fun, Captain Frank Zurn of MELMAR fame and his loyal crew member one James S. Taylor (father of 2007 Interclub chairman) took a stroll downtown for some more of good Canadian Brew (they didn’t need it)….
The story goes like this, one of them, (to this day no one knows which one), made a wise crack to one of the local Hockey players. Apparently this guy thought it had some thing to do with their girl friends (and maybe it did) anyway, the hockey players decided to give these boys a little body block or two which resulted in at least one black eye on a Mr. Taylor. So the ENIGMA’S log entry (excuse me poem) went like this:

THE GRAND DADDY OF THEM ALL WAS WHEN UNCLE KEN SOLD OUR BELOVED ENIGMA TO DAVE
KNOWLES OF PORT DOVER AND WE USED THE ERIE TO DOVER RACE TO DELIVER “HER”.

“PUNK POEM”
THE END OF AN ERA
WRITTEN BY CREW MEMBER LEW KLAHR
The Enigma has gone, an era has ended
Across the lakes her fame has extended
And now I recall with a lump in my throat
The great times so many have had on the boat
The design was by Nedwidick, built by Lund
She was launched and set sail in the year ’31
She cruised Lake Erie and to Put-In-Bay
To Mackinac Island – down Chicago way
She has raced most races held on the lake
She has left broken records in her wake
She’s sailed every Falcon since they began
A win – 1st to finish many times in that span
But the delight, the beauty, the thrill of the year
Was to lead down the bay under spinnaker gear
Jibe at the channel and lead the mad chase
To Port Dover each year in the Annette Cup Race
To finish number one and let out a big cheer
With owners permission open a beer
Put up our colors, Canadian flag at the bow
But this has changed – she’s Canadian now
The years have passed quickly – really 46?
The crew has varied, quite a mix
There’s been dozens, scores who’ve sailed on the boat
Learning basics of sailing so often remote
More than learning the basics of how to sail
Was to be a good shipmate in every detail
To learn to pitch in afloat or ashore
Crank a winch, tail a line, take the on the galley chore
With Murphy, The Count, Andy and Schauble
Chet, and Brub, and Rich not a bauble
We’ve had a great time over 46 years
Let’s revel in good fortune, not in tears
How was this possible, this era, this age
This delightful experience, this history, this page
T’was the dream of Ken Eckerd of long, long ago
To build the Enigma we all now know
His kindness, his generosity and so much more
His guidance and tolerance and patience galore
Made all this possible as we breathe a sigh
Many thanks Uncle Ken, you’re one great guy!!