MELMAR II On The Rocks 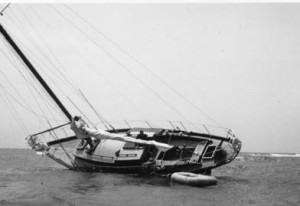 We were sailing the Port Maitland to Buffalo Yacht Club Leg of the 1963 Interclub cruise regatta which Melmar II was defending as the overall winner of the 1962 regatta. We awoke to a balmy, hazy sunshine morning and as we motored down the Grand River out to the starting line in Lark Erie our chief navigator, the late Gal Gunnison was getting the detailed “Mayfor” weather observations and forecast for the Eastern portion of the lake, with thunderstorms forecast for late afternoon and discussing what our course strategy ought to be. Well after reviewing the Canadian charts and prevailing weather conditions at the starting line we decided to maneuver Melmar II in position for a flying start with our new red and white striped reaching spinnaker (forerunner to the start-cut spinnaker which was developed a few years later) The wind was just beginning to freshen to about 15 knows and had shifted out of the Southwest to a more Westerly fetch, ideal conditions for the red/white spinnaker, visibility was around 2 miles and navigator Gunnison had laid out a perfect reaching course to get us well offshore to eventually clear Mohawk Point and Light, and than ease off and head directly to Buffalo with the wind coming from astern. 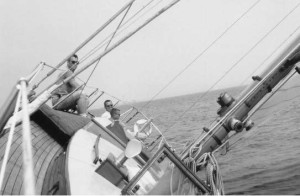 Our plan worked, but as we left the fleet behind we observed no other boat was flying a spinnaker and they were all heading slightly higher to the West. After streaming along at about 8 knots all of a sudden we felt Melmar II slowing down and a feeling like pushing the brakes on a car, low and behold we could see the lake bottom and found ourselves sliding up a huge flat inclined plane to an abrupt halt with mainsail and spinnaker flying full bore…WE WERE HARD AGROUND!!!
We immediately went into emergency procedure making radio contact with the Buffalo U. S. Coast Guard and advising our best estimated position and that all was under control with no person injured and advising any vessel in the racing fleet and starting committee boat to not attempt any rescue because it would be too hazardous for them. U.S. Coast Guard replied they would dispatch a 40 footer promptly and to be certain all aboard Melmar II were wearing life vests and engine fuel line from tank was turned off. It was about 10:00 AM and USGC estimated to be on the scene approximately 1:00 PM. The wind was now up steady to 15 knots westerly we advised we would take down mainsail but keep the red/white spinnaker up so they could see us as they got closer. By keeping the spinnaker up also kept Melmar II more stable with part of the lead fixed keel (6’ draft) and part of the port wood top sides resting on the inclined plane smooth rock. It seemed like eternity for the 40 footer to arrive, but true to tradition “semper paratus”, she appeared on the East horizon and arrived about 1:30 PM. Meanwhile we inflated the emergency raft and stood by for further instruction. It was remarkable how we could easily step down from the port side to the shoal and walk around Melmar II to examine her for any hull or rudder damage, none of which we could observe. Also Melmar II never took on any water so we all felt relieved and reassured.

Now the Westerly was increasing to 15/20 knots and seas 3/4 feet with white caps appearing and high cumulus clouds building to the west as the Coast Guard sent over a small outboard to examine our situation. The USCG Chief in command was very concerned about any possibility of removing Melmar II from the shoal. After discussing with him the alternatives, including his comments that because of the approaching sever thunderstorm that we may want to just simply abandon ship we convinced him to attempt a 180 degree of Melmar II and pull her off backwards but agreed that it could be devastating to the rudder and other parts of the hull.

The Chief ordered all crew members off the vessel and transported in their outboard to the 40 footer, with the exception of the Skipper/Owner who was to remain aboard. After doing so the outboard returned with about 300 feet of heavy synthetic towing line which was then wrapped around the beautiful Sitka Spruce spar just above the cabin top and padded with life jackets so the line would not damage the spar. Then back to the 40 footer with the towline and the anxiety to see what would happen when made fast and the pulling began.

In a few seconds Melmar II pivoted around and began to move down the shoal incline plane, right herself and float again! All were cheering thanking the U.S. Coast Guard and God! A few small boulders were bumped into as the USCG gingerly continued to tow us off and back to Port Maitland to be warmly greeted by the EYC race committee and local fishermen.
Everyone breathed a huge sigh of relief, we tied up to the dock we had left many hours ago, tried to relax, have some “Port Maitland Moo Juice”, eat (Dinty Moore Stew) and head to the sack just as the forecasted humongous thunderstorms arrived with 40 knot winds.

The next morning was bright and beautiful as we silently slipped away and had a perfect beam reach to Erie and the Good Ole EYC Basin.

Herman Lund of Lund Boat Works had been notified and said to bring “her” to his yard. They hauled “her” on the marine railroad and found a few small scars on the lead keel readily repairable. The real damage amid ship port top sides was going to take a week to replace, 3 planks each about 10 feet long. Melmar II was built in 1955 at Abeking and Rasmussen located in Germany on the Weser River in the town of Lemwerder, about 10 miles down river from Bremen. It is a magnificent yacht building facility, building vessels from 20 to 300 feet. Herman knew the yard and the impeccable quality of their workmanship. He called to have me come down a day after hauling out to show me the only difficult problem he had run into. The double planked Mahogany topsides were glued and through fastened to the hulls ribs with bronze screws. Removing the screws was a tedious job and added a few more days to the repair. Herman said, “I hate to admit it but those Krauts sure know how to build really solid and beautiful boats. No wonder why “she” was able to take the shock of going aground a relatively high speed and survive with little damage”

When ready for launch Melmar II looked as good as when she arrive aboard a Trans Atlantic freighter in New York harbor in late September 1955. And Herman in his own inimitable humble manner was smiling, proud too of his workmanship matched to perfection into an Abeking and Rasmussen sailing vessel.

So “lessons learned and nothing spurned”, on the night of our traditional annual fall crew dinner, navigator “Gunnie” stole the evening by presenting the Skipper with a large painted black wood medallion plaque upon which was mounted to rough bruised sections of Melmar II planking and white printed words TO MELMAR II FIRST TO FINISH PORT MAITLAND